3 million Indians live in America. But not a single unified Prolife representation. My eyes constantly scanned the crowd to see if we could get hold of Indians and if somebody will get hold of us. But it was a shock to me when we learned that more than 50% of Indians who live in America are Democrats. And after a while I thought to myself, with less than 5% of catholic population in India and radical Hinduism running the government how could reality be different. After all Democrats advocated for slavery and segregation and have strong affiliation with racist ideology and so do upper caste hindus who established ‘Eugenic Clinics’ in India and whose families have the money and opportunity to come to America and finance radical Hindutva groups back in homeland. We finally spotted two faces that resembled of Indian origin but they were too shy to stop for a chat or to shake hands. Nevertheless we went parading the streets with our banner to show the few who gave thumbs up and smiles, encouraging our humble effort to represent Indians at the great March for Life.

The kindness showed by fellow Americans will not let you rest after the March is over so you can get back to the comfort of the heated cozy indoors. 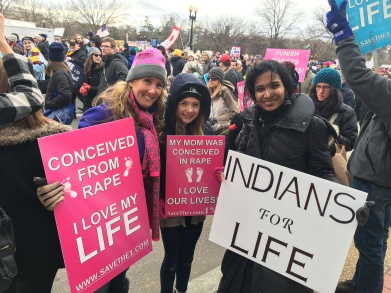 When you see pregnant women, babies, old people with walkers, people in wheel chair marching on a freezing windy day, you are moved to do more. This is the America which India never got to know. This is the America the liberal Indian media would never want the ordinary Indian to know. The America which defends life, which gives voice for the voiceless. And so this is exactly what we wanted our people back in India to know.
People estimated the crowd to be more than 700,000. And to see such a huge crowd march without any tension, without any violence, without a single curse word is what I feel is the mark of a changing Culture. And this is what we need in India. As we marched, looking at the enthusiasm of people, the chanting, the signs, the energy, the freedom, the spirit our hearts longed to experience the same in the homeland. Our people are being killed, killed in massive numbers. Our people are being exploited and betrayed. Our people need to wake up and get to work.

March for Life marks the infamous day of Jan 22,1973 when the Supreme Court of United States legalized the killing of innocent children in their mother’s womb through the deception, lie and manipulation of the case called Roe V Wade. However the truth is that this woman Roe never aborted her child. But her case opened the floodgates of abortion in America killing more than 50 million children in America alone since 1973. But… India legalized abortion 2 years before America and since then according to the IPPF reports 4-6 million abortions are performed every year in India. So what’s the fertility level and Fertility Replacement Level of the country? Less than 2.3 . Which means India is dying.

6 million abortions and 4 million sterilization per year, including  mifeprestone in family planning program, the media’s betrayal, the dark forgotten past of legalizing abortion and above all this, trying to extend legal abortion date beyond fetal viability and bringing in active euthanasia and unregulated sex education  is simply evil beyond comprehension. And we don’t March, no candlelight vigils, no prayers, no prolife legislation, nothing. The Church is silent, the NGO’s active in promoting death, the culture is changing and people are being killed. Every day- every minute. When are we going to wake up?

However, great things happen from humble beginning. And may be this March is one such milestone. We had good conversation with friends and family in India, conversations about abortion and life which usually doesn’t happen, friends wondering what are we into, and strangers sharing posts and questioning about abortion. May be 2018 would be different, with increased sense of awareness of Culture of death and reverence to Life in India. 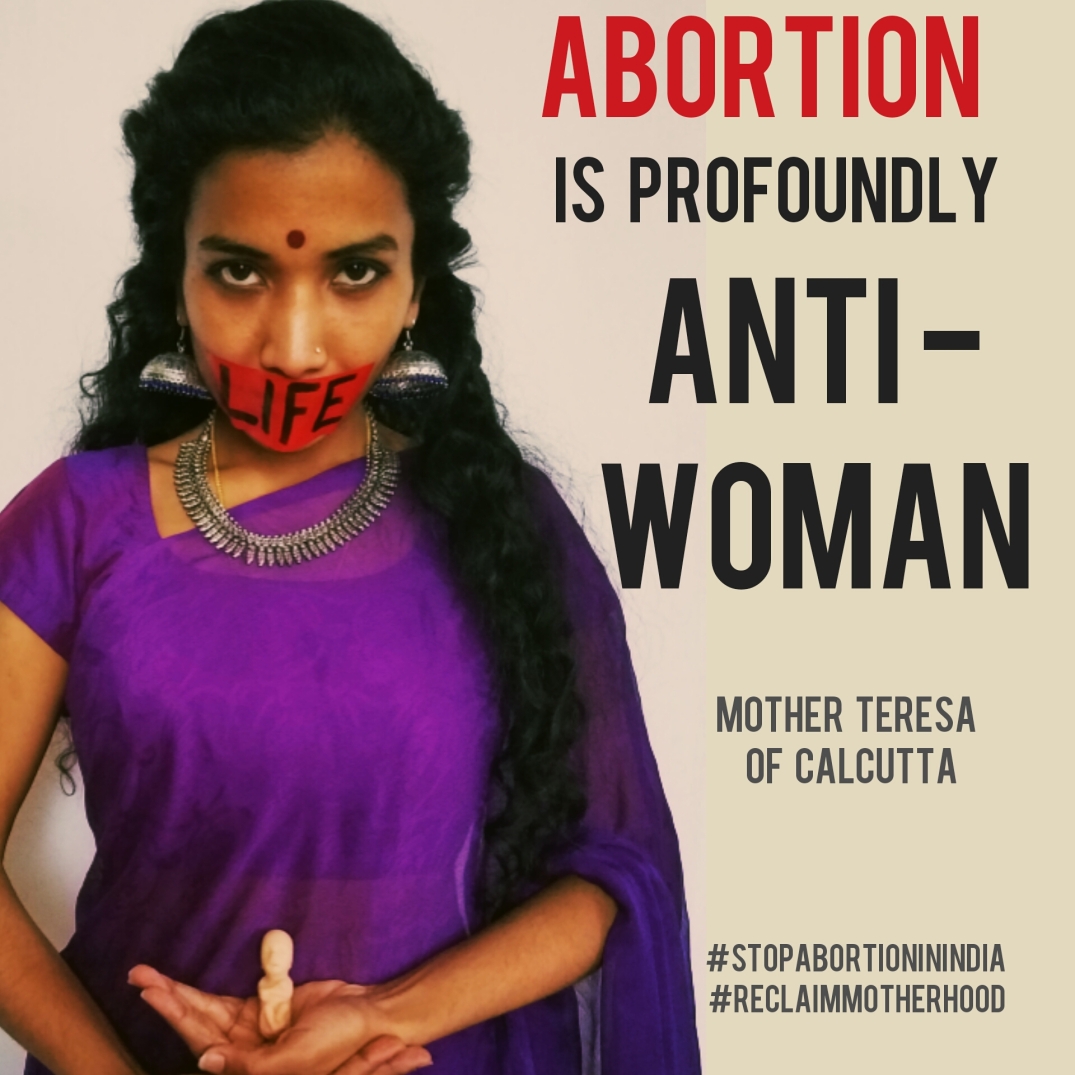 I end my day as usual with instagram involving in some online evangelization. So I post the above picture to capture the attention of Indians mainly so they can  relate to the quote. And not surprisingly I catch a fish. Hooray! This is what I was waiting for! Here’s the question she throws at me:

Status of Abortion in countries around the globe

Abortion is legal in all but 4 countries around the world i.e; 191 countries out of 195 allow abortion for one or other reason and the common reason is to save the life and health of the mother. So do you think there’s a change in the evolution of ‘Motherhood’ around centuries? When fear creeps in…love is lost.

use ctrl+f keys to search the country you are specifically interested in or follow the alphabetical order for convenience. For a detailed list of status of abortion in case of rape, in case of babies with disabilities, in case of socio-economic conditions and much more go to : https://goo.gl/fPXsJI

“Can a mother forget the baby at her breast and have no compassion on the child she has borne? ….” Is:49:15