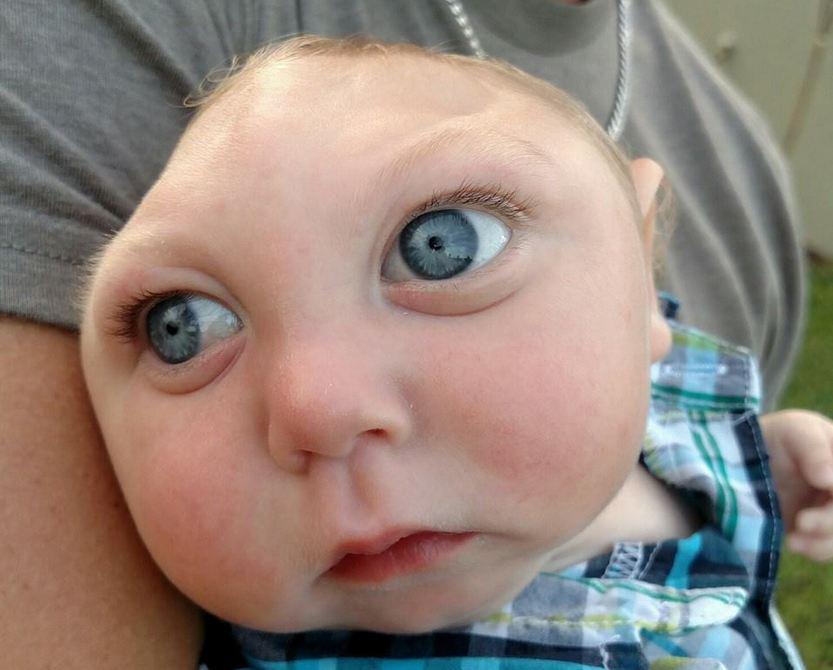 Hi! My name is Maria Gracia Letizia. You can call me Maria. I was fourteen weeks old when mom saw me first in the photo machine. Mom was little worried about me because Daniella the gynecologist showed my picture to her and said something was not alright. I love Daniella, she’s a very good doctor and intelligent too. Except for the fact that her photo machine couldn’t show how much I love mamma and dadda. So all Daniella was able to show mom was that I wasn’t quite normal. May be Daniella’s machine was missing something. Since I was inside mom I was able to sense her sadness. Something makes mom sad, it makes me sad too.

Daniella wanted to have additional pictures taken (3D ultrasound) to give mom further details about what they think is an anomaly. All these days before coming to this photo machine mom seemed very happy and excited for me. I came in her tummy within a month mom and dad were married. Maybe if I had come little later they would’ve been happier? Well, I was told being there inside mommy meant bringing God into our home. But I never meant to scare them.

The next day mom went to Daniella by herself to take special pictures since Dad was at the hospital. Now they were sure of what they saw. They said I had Anencephaly. A portion of my brain, skull and scalp was missing and I would die soon after birth. Doctors told mom to take the therapy and the therapy was to get rid of me. They call it therapeutic Abortion. Mom was quite terrified. Because she could see that I was doing all I can, to grow and love and yet the doctors have no cure for me except Abortion. So much hoopla for science, You cannot cure something, destroy it!

Momma does smile when I kick and wriggle. She would call dad and show how I move around in her tummy and they both would smile and kiss. But now that the doctors saw that I don’t have part of my brain something had changed. Well I don’t see any change. I love them more and every day my excitement to meet them is ever increasing and Daniella’s machine proves useless. Nobody was able to trick my mom into getting rid of me. She was firm in her love.

Mom broke the news to dad about me. she was worried that dad would want to get rid of me soon. Sometimes I don’t understand mom. I’m here as an answer to their prayer because God told me there are two beautiful people down there whom you should meet and in seeing you they shall see me. I was here to show them the way to heaven. Because, one day my mom was going to be A Saint.

The whole world was against me. The doctors, the relatives, friends and even some people at the Church. They considered me a misfortune. They accused that I was a punishment from God for something mommy did. Nobody thought I was important or that I had such a marvelous task of bringing heaven down to earth. Nobody thought I was made with greatness as enormous as bringing someone into eternity with me, a grace which is quite unusual and a task which is so burdensome for many. Mom and Dad had to fight the conventional views of pregnancy and in fighting for me they were fighting for God. That I don’t have to have brains to be loved, that I don’t need to be healthy without any defects to be loved and that there are no conditions for love. God was using Mom and Dad to show the world of His unconditional love.

Having me wasn’t an easy task. Momma had 6 liters of fluid in her belly. People say other mommas with normal babies had only 1 liter. This made breathing difficult for her so the doctors wanted to get me out soon to avoid any hurt. I was 35 weeks then. Mom wouldn’t agree even now. She was firm in meeting me as God wanted her to meet me. In His time, as He planned. She refused injunctions or cutting open the tmmy. And there I was born beating all the odds on June 10 in a natural way. The doctors failed to check if I was alive or dead and assuming my parents wouldn’t want to see me they rushed me to a separate room. But Daniella wouldn’t allow. She placed me in dad’s arms.

I wouldn’t grow up to go to school or make them proud, I won’t be able to take care of them when they get old, I won’t be able to play around make them laugh or smile, I won’t be even long enough for them to celebrate. Yet, they loved me. This is the perfect school of Love that The Father had planned for them. Cristina (mom’s friend) said when I was born mom and dad were prepared to face the worst, not for such a beauty. 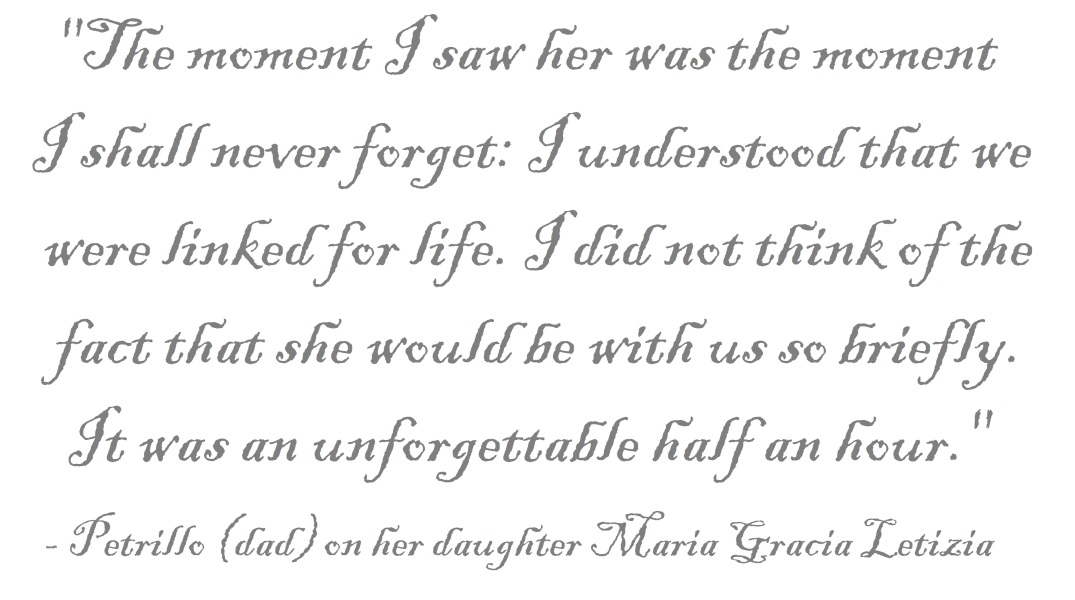 I was with them for half hour and Fr.Vito baptized me. There was a shower of kisses from everyone: nanna, aunt, uncle, simone, christina, fr.vito. Nobody wants to let go of me. I was important. I remember It was time for me to go to Heaven. Dad placed a Tau cross around my neck and took me to the mortuary. They didn’t want to let me go but here I was to open the gates of heaven for them. That in the painful journey of accepting me and loving me they took part in the agony of Jesus who did what The Father told Him for the sake of love.

The world showed them Abortion, which they say was an easy way out, that everyone had to be perfect in order to be accepted, that you need to have brains and all organs, beautiful, strong, smart, capable in order to be loved and that it’s waste of time caring for babies like me. And so fearing the loss of one’s own life they choose to end the life of another. Someone said the opposite of Love is not hate but possession. How true! And, mom and dad proved the world wrong. They gave me the freedom to live as long as I was able to. They accepted me as a gift from God and in doing so not only did they give me the gift of life but, they gave themselves as a gift. And this was the first step for my parents in their journey to heaven. And here I have a saintly mother Blessed Chiara Corbella Petrillo.

They were proud of me. They let me live for 252,800 minutes/5880 hours/245 days/35 weeks  to breathe, think, dream, share, and listen. To experience their love for me, of their struggle to save my life of their prayers to let me live. They fought for my dignity. They reminded everyone they encountered that I even though little, even though so poor in every terms meant so much and most importantly I am a person. In this world where millions of abortion take place: throwing off babies in dustbins, burning their body to create energy, using them as byproducts for cosmetics, medicine and research, avoiding children as inconvenience and calling us names like ‘clump of cells’ my parents proved I mattered most, and in welcoming me they stood witness to what love is.

“We were content to hold you in our arms, for even half an hour we were fine. We were not able to stop looking at your nose, the same as mine, and those little hand and those little feet. We did not have much time to tell you too many things; that we love you, we know that you know it, but perhaps you do not know that you were born for eternity and that am not your father, nor she is your mother. Think of that! The one who desired you is also our Father. I know it is a little complicated, but soon you will understand: Life is marvelous, for this also we sought you. It does not matter how much time we spend together; to us matters what you shall be. Here each thing does not matter really; we can make do with less of everything. What is necessary is to know the Father; it is to prepare ourselves for this encounter. And you were born ready, I do not know how to tell you how proud we are of you. We accompanied you as far as we were able. Now you shall know the father, Maria Gracia Letizia, Joy of our life.”

If I had aborted her, I do not think that I would have remembered the day of abortion as the day of celebration, the day in which I had liberated of something. It would’ve been a moment that I would have tried to forget, a moment of great suffering. But the day of Maria’s birth I shall always recall as one of the most beautiful days of my life and I shall tell all my children that they have a special sister who is praying for them in Heaven.

END_OF_DOCUMENT_TOKEN_TO_BE_REPLACED

There was an error retrieving images from Instagram. An attempt will be remade in a few minutes.